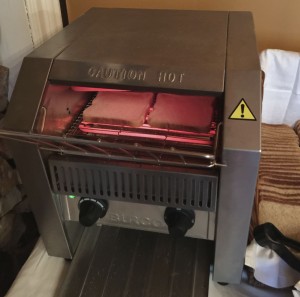 I’m not a lazy person. I have a job, a house and family with 3 demanding Labradors. When at home, I don’t ask my wife to make my toast for me, (I daren’t ask my wife to make toast for me), nor would I ever expect her to do so voluntarily. I actually quite like making toast when at home. I like using my Dualit toaster, even though my favoured Warburtons Toastie doesn’t quite fit in it right, and therefore needs constant attention. The process, I guess, is labour of love.

However, when I’m staying in a hotel, one of my many pet hates, is DIY toast. I’m not sure what the attraction is for the hotel, are they saving loads of money, or labour by not making it themselves? Whatever the reason, it seems these machines are becoming more and more prevalent and immersed as we all are these days, in this energy-saving mentality, their growing popularity is somewhat of a mystery to me.

Many a time, I have popped my sliced bread into the slot, plunged the doughy slithers into the bowels of the contraption, and began that awkward dance. The “dance” is not dissimilar to a male bird of paradise, performing a courtship ritual to his intended mate. A little hokey-cokey-esk, he moves in, retreats out, in again, you get the picture. Well, once my bread is plunged, I now can’t settle. I won’t retreat to the safety of my table, so I’m forced to participate in this mating dance. Continually fearful that someone might come and steal my perfectly bronzed bread, or that it might blacken too much and spoil, I keep one eye on the prize at all times, but move back to allow other victims to utilise the machine. This uncomfortable and mildly embarrassing manoeuvring is a key feature for my hatred of this activity which often results in my decision not to have toast at all.

After what can only be a couple of minutes, but feels like much longer, impatiently, I pop the bread to check on its progress of transformation into golden toast. Only then do I realise that the bread has unwittingly been resting nicely in a couple of cool slots, whilst the slots at the other end of the toaster were the ones getting hot! Hopefully, no one will have noticed my mistake, and I correct the error, only to once again commence my toaster courtship ritual, for another few uncomfortable minutes.

The other, more industrial DIY device is the stainless steel box containing a pair of glowing heating elements, hot enough to return granite to liquid, with a continually running conveyor above and below the elements. The function and operation of such a device you’d expect to be abundantly evident, which could exist without the need for instruction. Unfortunately, this is not always the case, and about the only positive aspect I can offer in relation to the existence of these devices, is watching some numpty put a croissant on the conveyor.

Much like, and for very good reason, you need to keep matches and medicines away from children, adult humans blessed with less than an average portion of common sense, should also be served restraining orders, preventing them from operating these dangerous machines.

Momentarily, placing the croissant on the moving, angled conveyor might seem like a great idea, but the fun starts when the operator’s error and the croissant’s flash point coincide. Watching someone frantically trying to waft the flames with a linen serviette whilst wishing the conveyor to speed up and pop out the burning offering away from the glowing elements, is one of the few delights of business travel. Diffusing the smoke sufficiently to prevent the evacuation of the hotel is the only possible redemption the panicking operator can hope for.

When putting white bread through the device, one run normally just provides a slice or two of warm bread, a little like it might be if you left it out overnight. If I feel brave enough and the toast is undercooked enough, I will sometimes run it through a second time. Double dipping in this way carries inherent risk and should not be entertained without a deft hand and full view and unhindered access to the appropriate fire extinguisher.

Estimating that a full second run would probably provide a little too much excitement for such an early hour, my favoured trick is to attempt to launch the partly browned slices(s) half way down the conveyor. This sounds much easier than it really is, because the opening to the machine is normally hindered by a 45 degree angle to the conveyor, leaving an almost impossible window through which your toast can be launched.

Usually, having failed to launch the bread far enough, I then frantically begin to try to nudge it further down the conveyor, without touching the elements and electrocuting myself. I’m perversely looking forward to the sad news of the passing of a hotel guest, whose death has been caused by one of these contraptions, compounded only by the hysteria of unwitting diners, traumatised by the convulsing guest whose smouldering corpse then only serves to provide a hazard when heading for a refill of grapefruit juice. That, or the sad demise of the entire hotel, raised to the ground by an almighty fire that raged long into the evening, would be some kind of poetic justice. Only then, like some kind of born-again Luddite, might I cease to rant about these confounded machines, smug in the knowledge that I saw it coming!

So, when I enter a hotel’s breakfast room and I catch sight of the DIY toast machine, my mood always sinks. The disappointment of choosing to avoid the process and not have any toast is eclipsed only by the anticipation that one day, the inevitable emergency might occur during the consumption of my Special K.