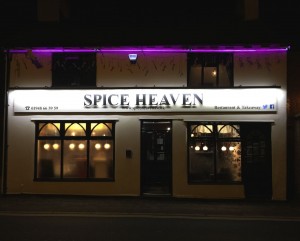 Accompanied by an old friend who has recently moved to Whitchurch, we were on the hunt for a good curry one Saturday night in March.

Spice Heaven was selected on the strength of a recommendation and we made the smart move of booking a table in plenty of time. I say “smart move” because when we turned up at 8pm, there was standing room only in the heavily cramped foyer. Some were collecting takeaways but most were waiting to be seated, some of whom clearly hadn’t booked.

After waiting about 10-15 minutes, it was apparent there was a problem and we were invited to have our first drink, (on the house), whilst we stood waiting, politely manoeuvering around each other every time the door opened or someone moved.

I don’t think I have ever seen a restaurant as packed as this. People were shoe-horned into what is essentially a small restaurant and the atmosphere was quite something to behold. I smelt a rat when booking earlier that day, when I was told “we only have spaces upstairs, is that OK”? Ushered through the lively surroundings of downstairs, we were escorted to our table upstairs in what proved to be the polar opposite, an atmosphere I last experienced in a funeral parlour.

Quite unbelievably, and I can still hardly believe it myself as I recall the situation, my friend and I were invited to be seated at a table facing the wall. Seated beside one another, like a couple of naughty schoolboys, our gaze was only that of a faux artex wallpapered wall, decorated with prints of what appeared to be more oriental scenes, than authentic Indian ones.

In all my days I have never before been invited to be seated at a less conducive setting in which to enjoy a night out. It didn’t take a genius to figure out they were backpedaling fast. With a full restaurant and diners costing them money as they wait patiently to be seated, some bright spark decided that we could sit facing a wall, than the more conventional manner of facing your dining partner.

As one couple got up to leave, we were quick to stake our claim to the now vacant adjacent table, as we munched through our popadoms. In another bizarre move, our starters were served to the empty table as we finished our popadoms, as if there was now some panic to get us fed and out of the building.

Relocated, perplexed and mildly annoyed, it was time to order some food, which we did quickly. The room slowly began to become more vacant as the diners from each table left the restaurant, eventually and ironically leaving us in the room with a choice of every table to eat at. The funeral parlour atmosphere deteriorated somewhat to more of a mortuary standard and we were taunted by the still lively laughter and antics from the still packed restaurant below. The only company we were to have for the remainder of the evening was that of Smooth FM, gently playing a variety of less than authentic soft pop and love songs from the 80’s.

The food unfortunately failed to lift the mood. Speaking for myself, the Chicken Jalfrezi I ordered was weak. Neither spicy hot nor blessed with large chunks of tender chicken, it was more bland and scattered with small pieces of chicken amongst a generic curry sauce. My naan bread, although large enough to use as a duvet, was undercooked, stodgy and remained mostly uneaten.  My friend enjoyed his Korai but was also disappointed by the original setting and atmosphere.

Not wanting to stay a moment longer amongst the chilling corpses, the bill was requested. The young man, (rather foolishly on this occasion), clearly not furnished with all the facts, asked whether we had enjoyed our meal. Jumping straight in, before my much more conciliatory companion had the opportunity to speak, I responded with a polite, yet blatantly factual reply. The smile on the face of the young man served only to add insult to injury and it was at that point I suggested maybe the Manager might wish to bring the bill, (with whom we might engage on a more adult level).

The only redeeming aspect of what was a pretty disastrous experience was the manner of the Manager. He acknowledged that the first round of drinks was already complimentary and apologised for the seating arrangement we were originally offered. He went on to say that table isn’t normally used to seat diners at, rather to use as a table to serve from. He kindly knocked 20% off the entire bill and invited us to have another complimentary drink from the bar, which was a generous compromise. We paid, leaving a tip as it happens, and once again filed past the still buzzing downstairs diners.

The moral to this story, is if the person that takes your booking at Spice Heaven, asks if you mind being seated upstairs, you say yes. In fact, even if you’re fortunate enough to be seated downstairs, the food might still disappoint?!