The Red Cow is a relatively regular haunt for me, I have stayed several nights over the last few years, so staying on Hallowe’en seemed quite appropriate.

Unfortunately before I even arrived at the hotel I was a little annoyed. Foolishly, and quite out of character, I prepaid for my room and to make matters worse used a third-party to do so. Consequently, when I then needed to reduce my stay from 3 nights to 2, I was more likely to win the Lotto, than obtain a refund. The hotel was hiding behind the third-party, and the third-party was hiding behind the hotel, claiming neither were permitted to offer a refund. I accept that it was my own fault, so I’ll simply take the charge as a timely reminder to neither prepay for a room or worse still, use a third-party! Eventually it’s just not cost-effective!

At check in, I explained my booking faux pas, hoping for some last-minute change of heart, but this too was futile. All the public areas were decorated with a Hallowe’en theme and I was feeling like Lurch.

During check in I was asked if I wanted to prepay my breakfast. If prepaid, the cost was €10 per breakfast, if not it was €12 – like some kind of indecisiveness tax!

Room 327, (just down the corridor from the superbly named “Marvellous Marvin Hagler Suite”), is a lovely, large room with both a double and single bed. It was beautifully clean and the bed sheets and pillow cases were also immaculately clean and crisp.

Whilst the room was equipped with air conditioning, not dissimilar to a “game” of Russian roulette, the controls marked on the panel didn’t correlate with the functionality. It was impossible to get the room cool, even with the window open and having tried all permutations of the controls. Bearing in mind it was Hallowe’en and there was some function on in the hotel’s separate function suite, the noise from this could now be heard with ease.

The TV was bereft of any English channels like the hotel TV guide suggests there is. The TV itself was large and modern, but didn’t get much use at it happens.

In keeping with the cleanliness of the room, the bathroom was also very clean. The only adverse aspect of the bathroom was the flimsy shower curtain, the type that when dry, is sucked inwards once the shower is switched on. My top tip to help combat this is to drench the curtain before getting into the shower, it doesn’t completely solve the problem, but certainly minimises effect of the drag.

When staying at The Red Cow, (which is located about 8 O’ Clock of a clock face, to the west of the city), I like to take the Luas (tram) into the centre of the city. The Luas station is a 10 minute walk along a foot/cycle path accessed from immediately outside the hotel. The Luas is an incredibly clean, efficient and cost-effective way of travelling into the city. You might find it cheaper, (if a little less inconvenient), to stay here and commute, if you don’t fancy paying city centre hotel prices? Click here for info on the Luas.

There’s a bus service to and from the airport too, for next to nothing, from the Red Cow Luas stop – miles cheaper than a cab! Click here for airport bus transfer info.

The free WiFi available was as good as it gets. My measurements placed it in the top 10 of my measured hotel WiFi, with a handsome (almost) 20 mbps service. This quality of service is possibly better than many providers can offer customers at their homes. Click here to see how it compares with other hotel WiFi.

The hotel’s bar is large, in keeping with the size of the hotel, and food is served there too. It’s a relaxing place to sit and enjoy a drink. The function suite holds numerous events throughout the year, which I gather are very popular, it seems there’s always something on. The car park is large and free too, which also scores highly.

On this occasion at checkout, I wasn’t asked if I enjoyed my stay, which I find unbelievable. If I owned or managed a hotel, you’d be sacked for not asking that, (and following up on the feedback)! What better PR can you ask for than checking that the customer was happy before they pay and before they leave?

As it happened, I did enjoy my stay and I’ll be sure to return again, the next time my business takes me to west Dublin. 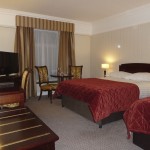 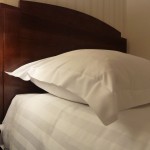 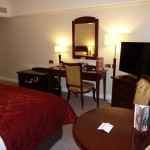 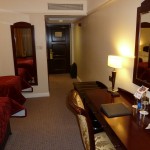 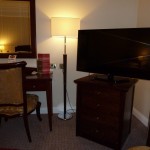 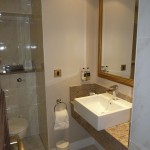 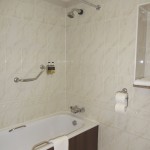 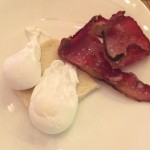 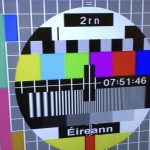