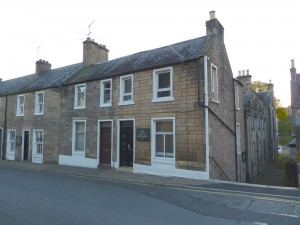 Inverness has many hotels, a good number of which I have stayed in over the years. The city can be problematic, when looking for a good, reasonably priced place to stay, due I assume to its year ’round popularity with tourists – and the prices reflect this.

I’m almost certain I haven’t previously visited the Glen Mhor, and am quietly confident I won’t be returning any time soon, based on this 4 night stay in one of their “Serviced Apartments”. Priced a good bit above a standard hotel room, in any other city, the rate I paid was in truth over the top. I also, (very easily) negotiated a 22% discount down, from what would have represented even less value for money.

The most positive feature of this hotel is its location. Literally on Ness Bank (that’s the name of the road), it is on the bank of the River Ness, which is a wide and attractive river running through the heart of the city. The city centre is a two-minute stroll down river, and you are just moments from a host of shops, bars, restaurants, and Inverness Castle.

The appeal over a serviced apartment over a standard hotel, was based largely on two factors, which were the length of stay, and that I was travelling with a colleague, (who stayed in another of the hotel’s apartment a couple of doors down the road). The apartment option was to provide a little more space and flexibility, when not at work, more than a standard hotel room would provide.

At reception I was a little annoyed. I was encouraged to sign, “here, here and here” when checking-in, the last of the three “heres” was to allow the hotel to charge your credit card in full at the end of your stay, without further approval. Although I appreciate the need to pre-authorise a card upon arrival, I expect to be able to check and agree a bill, before I am arbitrarily charged, so I didn’t sign that authorisation.

Both apartments were just a few yards away from reception, and it seemed that by chance, I had managed to get the better of the two we were allocated. That said, I’m not entirely happy that either were genuinely fit for purpose, especially at the rate we were paying.

My immediate impression was generated, as I opened the front door, by the large stain on the pale hall carpet. There was a lounge / kitchen off the hall downstairs, and one decent sized bedroom and bathroom upstairs, but the reasonable sized proportions of the rooms were sadly let down by some easily resolved unwelcome aspects.

The bathroom floor was not only unclean, as it had numerous dark hairs distributed across it, but the tiles were cracked and much of the grout between, which I assume was once there, was now missing. Most disturbingly, yet amusing, (as I only had to use it for a few days), was the deafening noise the toilet made when flushed. I have stayed in some places in my day, and listened to many ageing Saniflo toilets gurgling into the night, but this one, (and it’s not a Saniflo), made the most incredible noise for about 2 minutes after flushing. The unbelievably loud noise could be heard throughout the apartment, upstairs and down, and I have no doubt also in the private dwelling of the adjoining neighbouring property. How this situation has never been addressed is a mystery, as if I lived next door, I’d be certain to have an ASBO placed on it!

All the plumbing was a problem really. Other than the rocket-propelled toilet, the basin taps were like high pressure jets, angled to drench you, which needed great care and memory to operate. The heating controls on the radiators were faulty, and the heating would come on late at night, and not early evening when required. My colleague’s shower apparently had an adjustment issue! One millimetre on the dial too much and the freezing cold flow of water turned into a scalding hot one! 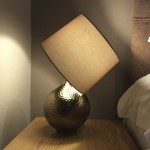 Some attempt had been made with the lighting, as some modern LED lights were evident, but again, once a more than superficial glance was conducted the more than disappointing aspects were more than apparent. For instance, if my wife was with me on that trip, she’d be cursing that there was no light near the mirror. One bedside light was not working, and the other one was faulty, with a wonky shade needing constant attention. Lights on the tight twisting staircase were both faulty, which is simply not good enough.

After 4 nights in the bed in apartment 3, I felt like I’d had back surgery, performed by a sadistic witch doctor. Not only was the double bed actually 2 singles pushed together, but the mattress (on both sides), was well past its best and no longer fit for purpose.

The theme of dirty stained carpets continued from the hallway to the bedroom, and onto the off-white duvet cover, which could do with replacing as well.

I don’t have a problem that the building is clearly an old one, built of local stone and could be very nice indeed, but I think the offering was more like student accommodation than suitable for a businessman looking for something better than a hotel room. WiFi was pretty good though, so no complaints there (for a change).  Other aspects that make it unsuitable for business users, is the lack of a suitable workspace and the hotel doesn’t accept American Express.

Downstairs the kitchen was passable. Importantly, it and its contents were clean, with the exception of the mouldy under-sink cupboard, which reminded me of an under-utilised holiday let. Sadly, there was no freezer, no welcome gifts, (like a packet of home-made biscuits), no water, no milk, nothing! There was a few squirts of washing up liquid left in the bottle, and a handful of tea/coffee/sugar sachets in jars, but that was the extent of the hospitality in this apartment.

The 1980s bar stools, present at the ‘breakfast bar-type’ surface were too low to enable you to sit and eat a meal there, which forced meals to be eaten off the low coffee table in the lounge area.

I couldn’t see a smoke alarm in the property, and very alarmingly, (pun intended), when the fire alarm went off at 5 am on the last morning of my stay, nothing sounded in my apartment! According to my colleague, all the other apartment’s occupants were assembling in the car park, until the dozy night porter extinguished the toaster!  I slept on, completely unaware of the activity outside.

Now forgive the hint of sarcasm, but according to the 2 foot square sign on the front of the house, saying “Serviced Apartment 3,” there was not a lot of servicing going on. When I arrived back on the second evening it was obvious that there had been no servicing going on at all. The next morning I made a point to telephone reception, to make sure the place was serviced that day, which it was, but guess what – it wasn’t serviced the next day! Either it is a Serviced Apartment, and I’m charged accordingly, or it’s not! Oh, and the only service I did receive didn’t include a clean of the bathroom floor, because all the hairs that were there previously, still remained!

The fact that I wasn’t charged for the breakfast I had on the first morning I’ll treat as compensation for the lack of service received elsewhere.

The complex of hotel rooms and numerous apartments were clearly well occupied, as the large (free) car park was full each evening. The car park is barrier controlled, which is fair enough, but there is no pedestrian access – so when leaving or returning to the apartments 8, 7, 5 or 3, you had to squeeze through or limbo under the barrier!

When checking out, just after 7 am, our credit cards were unable to be charged, for some lame admin excuse, and the receptionist casually stated that she’d charge us later that morning and email the receipts to us. For the reasons mentioned earlier – I find this an unwelcome and unprofessional method of checking out / paying for my stay.

The receipt was duly emailed later that morning, but being charged in this manner, coupled with the below par offerings, at the price I paid, my lasting thought will mirror my initial one – sloppy!